Call us now to schedule a tour

Dear Evan,
We cannot thank you enough for your professionalism and dedication to making our wedding so special. With coordination from Hawaii and Virginia, to making plans with mothers and friends until we came to town only one week before the big day, everything was classy, perfect, and just what we wanted. Even the thunderstorms and mudslides cleared up just in time for our trip down the aisle! Your staff made sure every tiny detail was taken care of, and allowed us to simply enjoy the events of the day with our family and friends. Our only regret was not eating more cake that night! We will forever remember your kindness, experience, and organization in making our day perfect &ndash; thank you for everything on and before July 21, 2006; it was all we could have hoped for our wedding day! Rest assured that with all you did (especially across the miles constant reassurance!), you and your establishment will always be highly recommended.
Warmly,
Bacchus and Jessica Beauvil

Thank You for all that you did for us on our wedding day.

This is just a little note to say Thank You for all that you did for us on our wedding day. You and your staff are amazing. The care and attention that our guests received was above and beyond what we were expecting. You made it feel very relaxed on a very emotional day. We did not have a worry in the world with you. All of our needs were met and your staff did everything that was asked of them without hesitation.

Thank you again for all that you did for us on our special day!!! 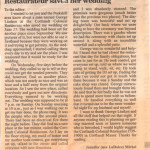 I wanted to let you and the Peekskill area know about a man named George Liaskos at the Cortlandt Colonial Restaurant who saved my wedding on June 27. The wedding had been set for another place since September. We saw pictures of it, but were not able to see it firsthand because they were working on it and trying to get permits. As the wedding approached, I started calling them every day to try and see the place. I was reassured that it would be ready for the wedding. On Wednesday, five days before the wedding, they called us to tell us they could not get the needed permits. They did, however, find us another place, which was not nearly as nice and was an hour and a half from the original location. So I saw the new place, called everybody and gave out new directions. Everything seemed to be working out. The wedding was supposed to be at 7 pm on Sunday. On Sunday morning at 10 am, just as I was walking out to get my hair done, the phone rang. There had been an electrical fire there the night before. They did find us a new place at the last minute, called the Cortlandt Colonial Restaurant. As I lay on the floor crying, my maid of honor and my mother took control, got everything set up, talked to the owner, and called everyone with new directions. We arrived early to see the place and I was absolutely stunned. The premises were gorgeous (much better than the previous two places). The dining room was beautiful and set up delightfully. Out back where we were going to have our ceremony was beyond description. There was a gazebo where we had the ceremony, with chairs set up around it, along with an incredible waterfall and splendid patio. George was so wonderful and helpful. I heard he had closed the restaurant that day for family obligations, but came in just for us. He took control, got everyone set up, told us where to stand, walk, sit, etc. He took care of getting the DJ set up, finding the cake (we could not get in touch with them because it was Sunday and the cake shop was closed. George miraculously found them and brought them in.) He said he felt badly that he was not able to spend more time with us beforehand. He handled everything so well that that it turned out to be the most wonderful night for my husband and myself. I want to thank George Liaskos and all of the staff helped out that night. If anyone reading this is planning on getting married soon, I would highly suggest the Cortlandt Colonial Restaurant (739-3900) in Cortlandt Manor.